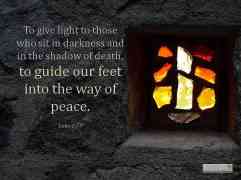 Now Zechariah can speak again and he launches into a beautiful, poetic prophesy not merely about his son, but about what God is doing all around. I love how Zechariah never loses sight of the main thing. He’s been mute for nine months, he now can speak, and he has this beautiful and important new son before him, but his prophesy is still rooted in what God is up to in the coming Jesus. He says, “He has raised up a mighty savior for us in the house of his servant David” (verse 69). He recognizes that none of this is about him or his son, but is about Jesus. Although he even sees beyond Jesus. This is not just about Jesus, but the whole world. Zechariah is holding his new born son, but still has the foresight and vision to see that all of this about one who will come and will “guide our feet into the way of peace” (verse 79). And he gives John his role: “You, child… will go before the Lord to prepare his ways” (verse 76).

If I’m Zechariah I believe I would be totally distracted by my own son. Now perhaps Zechariah would too but has learned from the lesson taught by being made mute, but I still think I would be all about m’boy. I would lose sight of what m’boy was actually there to be and to do. I’m inspired by Zechariah’s ability to keep the main thing the main thing, and to recognize the role that his son John will play. He is there to prepare. And what an important role that is. As I’ve preached many times, when I think back on my life and faith, there have been many John the Baptizers for me. That is, there have been many who “prepared the way” for God’s presence to come alive in me. Who are your John the Baptizers? Consider taking some time to reflect on your life and name them. And then, if you can, even reach out to them in some form and thank them for preparing the way, for helping you notice God’s presence in your life and helping you come alive to it. John the Baptizer plays a big role in the beginning of the story, but it’s not too long that he gets left behind and we forget him. I think it can go that way with our own John the Baptizers. As our own story moves along we too easily forget those who prepared the way for God’s presence to come alive in us.