The Most Excellent Theophilus

“Since many have undertaken to set down an orderly account of the events that have been fulfilled among us, just as they were handed on to us by those who from the beginning were eyewitnesses and servants of the word, I too decided, after investigating everything carefully from the very first, to write an orderly account for you, most excellent Theophilus, so that you may know the truth concerning the things about which you have been instructed.” (Luke 1:1–4 NRSV)

To me, this is a strange beginning. All the other Gospels begin with, what I think, is some broad sweeping statement. John begins with a flashback to Genesis 1 (you can’t more broad and sweeping than that!): “In the beginning was the Word, and the Word was with God, and the Word was God…”. Matthew opens with the Genealogy, beginning with Abraham and working  all the way to Jesus. Pretty broad and sweeping, I’d say. And then Mark begins with “The beginning of the good news of Jesus Christ, the Son
of God”. Pretty clear. But Luke. Wow. What a snooze-fest opening.  Overall the opening is well written, but it reads like one of my seminary books. And who’s this “Theophilus” guy anyway? When I hear the phrase 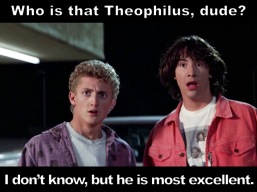 “most excellent Theophilus” I don’t hear dignified writing. I hear Bill and Ted’s Excellent Adventure. Although, that’s not Luke’s fault. It was written nearly 2,000 years before Bill and Ted. Although they were time travelers. Hmmmm. Bill and Ted aside, why does Luke address an entire Gospel to one dude?

It’s quite possible that there was one man named Theophilus that he was writing to and for, but I’m in the camp that says there’s something bigger going on. This name, which was a common name in those days, is a compound Greek word consisting of “theo” and “philus”. “Theo” means “god” and “philus” is one of the Greek words for “love”. When you put them together the name means “God-Lover”. Many wonder if (and I believe to be so) Luke was addressing this work to any and all lovers of God anywhere at any time. It’s as though Luke is saying “do you love God? Because if you do, you need to hear this story. It’s a really great story”. So, most excellent God-lovers out there, stay tuned, because Luke’s got a story tell. It’s an old story, much of which you’ve probably heard before, but it’s a really good one, one worth diving deeply into and worth telling again and again. If you love God, you’re gonna love this story. And if you don’t love God, you just might by the end of it. It’s that good.